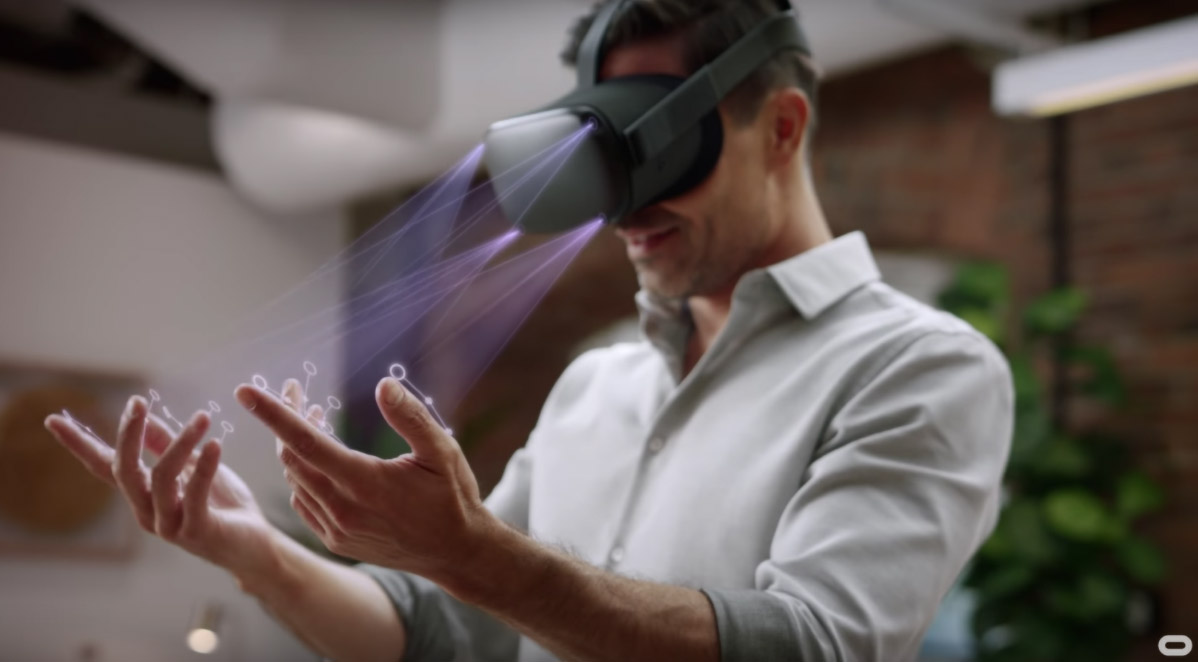 Our game HitMotion: Reloaded is a mixed reality fitness game, that is currently compatible only with the Vive Focus Plus because this is the only headset allowing passthrough augmented reality. But the Oculus Quest is slowing implementing new features that make us think that it will enable AR soon. And this, of course, has all our interest.

The Oculus Quest is the virtual reality headset of the moment: it is affordable, it is incredibly easy to be used, and it has an amazing library of official content, expandable through the indie content available on SideQuest. The icing on the cake is the Oculus Link, the functionality that lets you attach your Quest to your PC via a USB cable to let you enjoy PC VR content with your device. For all these reasons, the Oculus Quest is the most sold headset in this period.

Oculus is continuously updating its headset, now at version 16 of its runtime, adding always new functionalities, like a recent revamp of the UI. But one of the features that Oculus is slowly but steadying updating is the “passthrough” vision of the device. And this, of course, has all our interest.

From a rough passthrough to an MR headset?

The initial passthrough feature of the Quest just let people see their surroundings when they were outside the play area (outside the Guardian boundaries) so that to let them see where they were risking stumbling upon. This feature was much appreciated by the community, but honestly speaking it was not something new in the VR world (the Vive Focus and the Mirage Solo already implemented similar features) and the vision of the real world was very distorted.

But some months later, during OC6, Oculus upgraded the AR vision offered by the device to the next level, and re-dubbed it as “Passthrough+”. Thanks to some engineering magic, Oculus made the passthrough vision

While the results were not perfect and there were still some distortions, the visuals were incredibly better than before, and passthrough became much more usable.

With v15 update of the Quest runtime, some months ago, Oculus introduced “Passthrough Shortcut”, letting users activate the passthrough on demand by just double-tapping the headset. For the first time, the passthrough was not only a functionality to guarantee the safety of the user, but it became a feature that could be used by the user when he/she thought it could be useful, e.g. to have a sip of juice.

The news of the day is that now you can use your vision of the real world as your environment in Oculus Home, the main menu of the Quest. This means that you can see all the UI elements of the Quest and its 2D apps onto your real world. This is Augmented Reality. The Quest has so become partially an Augmented Reality headset, since all its operating system can now work with AR.

Will the future be a Quest in mixed reality?

We now wonder what will happen next, with Oculus that seems to put always more attention to the AR features of the Oculus Quest. The next logical step seems to be the one of introducing mixed reality in the Oculus SDK, so that to allow all us developers to create mixed reality experiences for the Quest. That would be amazing and would let us all experiment with MR, and especially with hands tracking and MR, a combination that is very powerful, as we already showcased in our first experiments with the Cosmos MR.

The only limits to this vision are two:

So, either Oculus will implement this feature in the next months for Quest, or it is using the Quest to develop MR for its future devices, like the Oculus Del Mar.

We’ll be very attentive on this, and be sure that if Oculus will implement mixed reality, we’ll port HitMotion: Reloaded to it!

In the meanwhile, if you want to play our game, you can still enjoy it on the Vive Focus Plus on Viveport M. Download it now and stay fit while having fun!