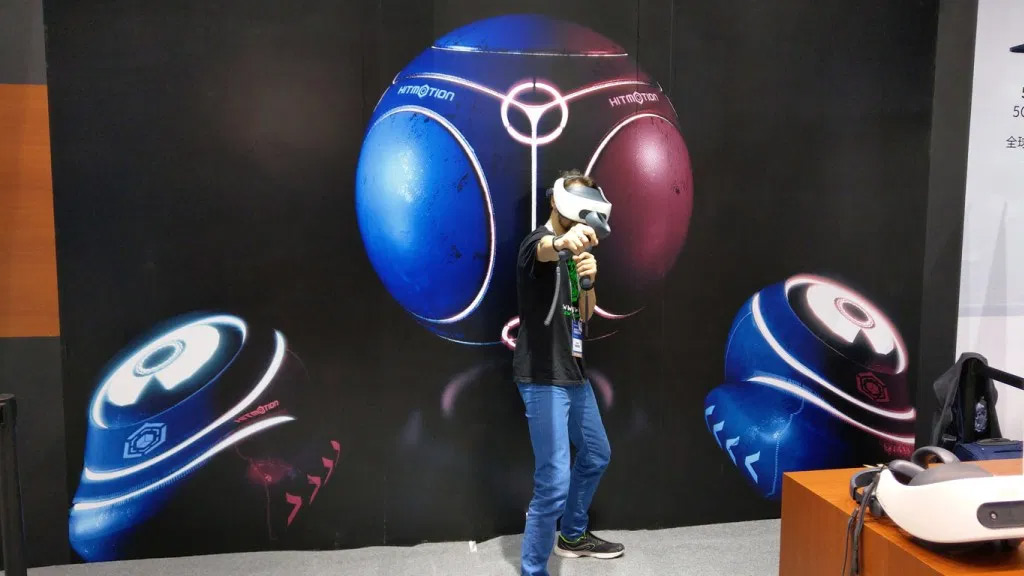 It’s a while that you don’t hear from us. Well, it is not because we weren’t thinking of you, but because we were working hard on improving the game at World Conference on VR Industry!
The demo we launched at VEC is nice, but we have much bigger plans for HitMotion: Reloaded. And we went back to China to showcase them.

We’ve just come back from an interesting trip to Nanchang, a cozy city in Southern China. There, every year the local government hosts one of the biggest VR expos of the whole China, called WCVRI (World Conference on VR Industry), and we were awarded a free booth to showcase our fitness game! It is cool that the organizers recognized the big potential of our little game.

We took with us the latest build of HitMotion, a super-secret beta version of what we’re going to release publicly soon, eager to get feedback from the Chinese players.

Thanks to the support of our new partners at MID Studio, that are now curating the look and feel of the game, we had a marvelous wall for our booth, that attracted many people into trying our game. And in fact, hundreds of people came to our booth to play HitMotion.

It has been a very interesting experience. First of all, we have learned a lot: it was our first time doing a full showcase in China, and we did many errors in the first hours.
For instance, we spent a lot of time preparing a long and detailed tutorial for the game, just to discover that no one in the expo was willing to play a tutorial, but they wanted to get immediately into the action.

We so removed the tutorial, but we noticed that if we provided them a level with too many game mechanics, they were confused about what to do.
It was a continuous rework of the game for every lesson learned, and it was satisfactory that the last day all the people were able to play it flawlessly.

Then we had also lots of fun. It is has been great to meet so many people and to let them play our game.
The best moments have been when in our booth came someone that played in a crazy way.

For instance, at a certain point, our game designer Max took to the booth one Chinese guy that started playing the game with so much passion, that it seemed that it was boxing for his life!

A crowd of people came to our booth just attracted by his extreme movements… it was a crazy moment. Look how he boxed hard and fast:

In the end, it has also been heartwarming.
We met many new friends there, and we especially have to thank Starry, a very sweet girl that helped us in our booth, and that was fundamental for us to be able to demo our game HitMotion: Reloaded to so many Chinese people that weren’t able to speak English.

She became a friend to us, and we hope to work with her again in the future: she was so kind and efficient.

The trip to WCVRI has been exhausting, but very rewarding.
And we came out with great feedback: almost everyone liked HitMotion and had fun while playing it.

This gives us great hopes for the official launch of the full version of HitMotion: Reloaded, that is coming soon.
When? Well… just wait some weeks and you’ll discover everything!