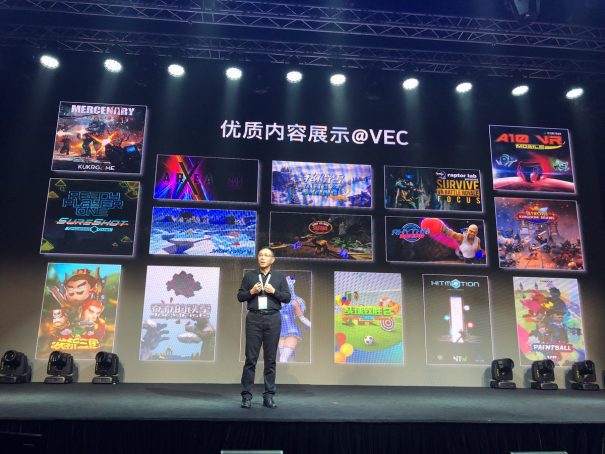 HitMotion: Reloaded is one of the 20 launch titles of the Vive Focus Plus!

The time for the reveal has finally come! Some months ago, we teased we were working on a new version of HitMotion, and finally today we can tell you everything!

The new game is called HitMotion: Reloaded, and it is a reboot of HitMotion, this time for standard VR headsets.

We had to sacrifice the full body feature of this game because even in 2019, the most common VR systems are not able to provide this kind of feature.

Keeping it would have meant that the market for such a game would have been too small, so not sustainable for a little indie studio like us.

But the game maintains the same characteristics of making the players move and have fun at the same time. We are sure many people will sweat playing our game.

We wanted to innovate again, and this time we did it in another way. If HitMotion was the first full-body VR game, this is the first mixed reality fitness game.

Thanks to the work of our developers, we have been able to unlock the cameras of the Vive Focus Plus and use this VR headset as an AR one. That is, this is not the standard VR fitness game, but it is an MR one!

The advantage of this approach is clear: you can play safely this game anywhere you want. You see your surroundings, so you are sure you are not going to punch your monitor, your walls or even your girlfriend that is in the same room of yours 🙂 No other XR fitness game on the market offers you the same advantage.

We of New Technology Walkers have not been alone in our quest for developing HitMotion. First of all, we have to thank HTC, that has been our technical partner, and has provided the hardware and a little financial help for the development of the game.

Then we have also to thank Whitelabel Foundation, which has curated the soundtrack of the game and has also provided many creative pieces of advice during the development and design process.

Developing this game has been satisfactory, but also a bit stressful because we had to develop it really fast to be ready for the launch of the Vive Focus Plus.

In fact, HTC loved our idea so much that it proposed us to make HitMotion: Reloaded one of the 20+ launch titles of the Vive Focus Plus, the only one in mixed reality. We took immediately the opportunity, even if this meant missing many hours of sleep for some weeks.

All this effort was rewarded with the launch day.

We took the stage at the Vive Ecosystem Conference, in Shenzhen, China, and after having explained the advantages of mixed reality, we announced HitMotion in front of an audience of dozens of people.

Announcing our game in a such a big and important conference, in a country that is on the other side of the world, was a very exciting moment… something that happens only once in a lifetime!

Currently, you can find HitMotion: Reloaded as a free demo available on Viveport M. It is available only for the Vive Focus Plus because it is the only headset that gives us the possibility of developing a mixed reality title.

But our adventure is not over. It has just begun… we have many ideas to improve this game in the upcoming months!